Phases of Play – an Introduction

Possession has always been a central topic of debate in football.

To get an understanding of possession, the most commonly used method was to look at the share of passes that a team has in a game. This forms the Possession % figure that is commonplace in most box scores. Back in 2017, OptaPro released its possessions framework, showing how events can be linked together to create sequences, and sequences linked together into possessions.

This framework is an ideal tool for an analyst to analyse both player and team styles. We can go from measuring volume of possession to being able to understand what teams do with the ball, and also how efficient they are in the choices they make.

Taking this a step further, we can look to better understand the different parts of a sequence that make up a team’s style of play by partitioning out the contents of a sequence (i.e. the individual events) into their distinct phases of play. To do this, we created a model that adds a tag to each event in a sequence depending on its criteria of where on the field it takes place, what happened before it and what happens after it.

The model is still in development and will evolve during 2019, driven by feedback from OptaPro clients.  Its current iteration was showcased at #OptaProSoccer and the OptaPro Konferenzearlier this year.

The existing model is rules based, with the classification of events into the phases depending on whether they meet certain criteria or not.

The model identifies the following phases:

The approach used here was a ‘football first’ one, leaning on the football expertise within OptaPro.

The choice of taking a ‘football first’ approach here instead of a ‘data first’ approach is an interesting one. When it comes to breaking down a football philosophy into its component parts, there is an element of subjectivity involved. Does your definition of a transition match mine? Can a team build-up multiple times in a sequence? And so on.

By creating a set of rules and tweaking them based on reviewing the data outputs and video, it allows us to better communicate how this model is created and the reasons for each event being in a given phase. One of the key factors of getting buy-in with the use of analytical models is to ensure that you’re speaking the same language. Through a rules-based approach, we can ensure that the reasons for a given phase label can be explained, and we’re using phases that we defined instead of using those created with an unsupervised model.

Taking a look at each phase in turn (although set plays have been omitted from this article), we can learn about the player and team level metrics deriving from this framework.

– Teams are looking to establish control of the ball in these moments.

– Transitions must start in open play following an opponent’s possession.

– Not all transitions are successful.

The table below lists the players who are the highest outlets for a transition phase in the Premier League this season. An outlet is a player who receives a pass from one phase, therefore taking you into another. In this example, a player is rewarded with a transition outlet by receiving passes from players who are currently in transition. 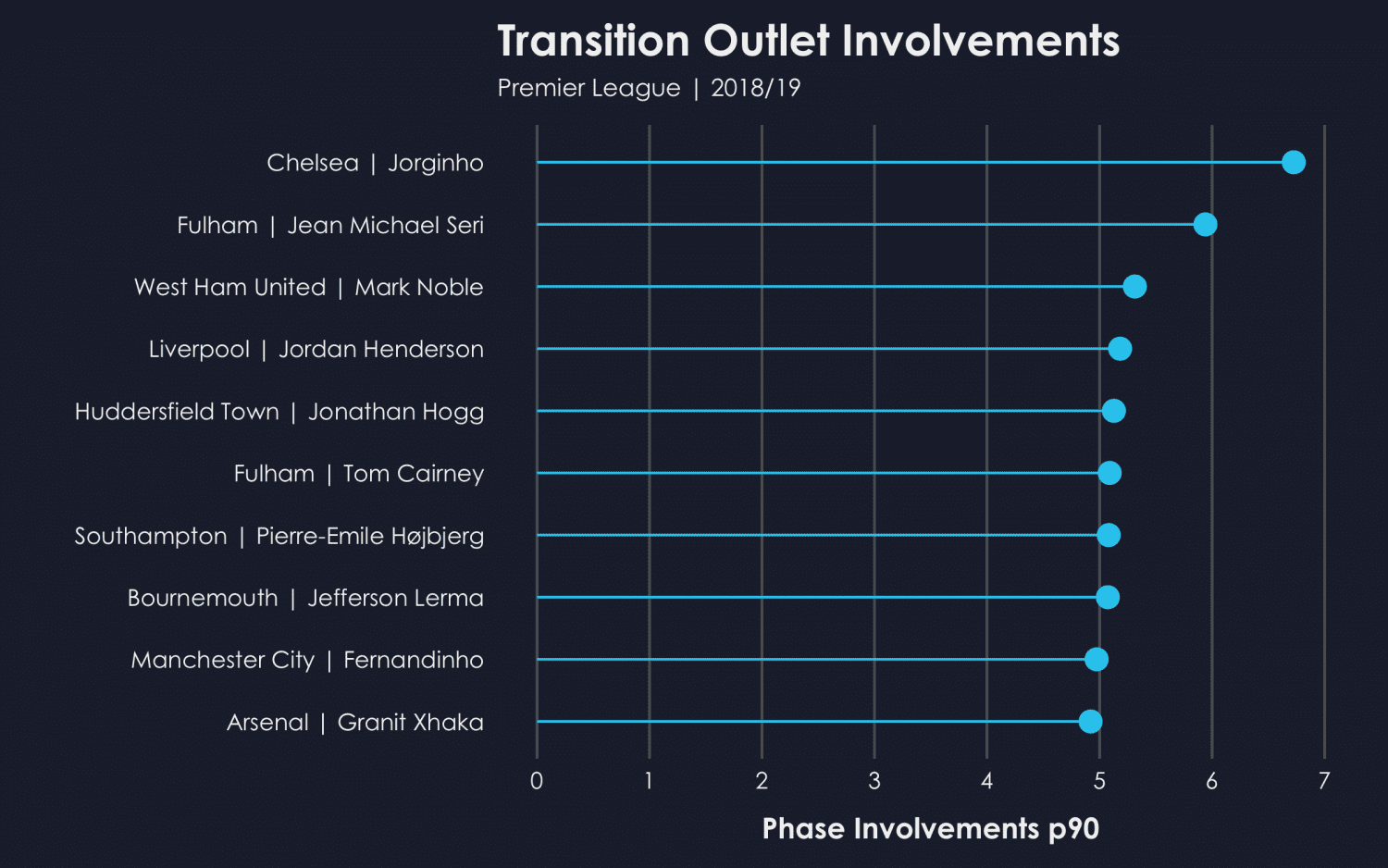 From this, we can see the value that Jorginho provides to Chelsea in his role at the centre of their midfield three. Receiving 35.6 passes in the defensive half per 90 this season, more than any other midfielder in the Premier League, the Italian is a key option when it comes to being available to move the team out of transition and into their next phase of play.

Notably, a lot of the other players listed play similar positions in the centre of midfield – receiving the ball after it’s turned over and starting attacking moves.

How a team plays from inside their own half and moves the ball into midfield, either centrally or out wide.

– Characterised by controlled possession in a team’s own half.

– Can only happen once in the current iteration of the model – something which may change in the future.

– The phase ends when the ball passes over the half way line.

– Early on in the game (game state dependent) this is usually based on the team’s tactical objectives and is indicative of their preferred style of play.

Analysing how long a team spends in each phase as a proportion of all of their phases provides us with an understanding of their style when it comes to building up. 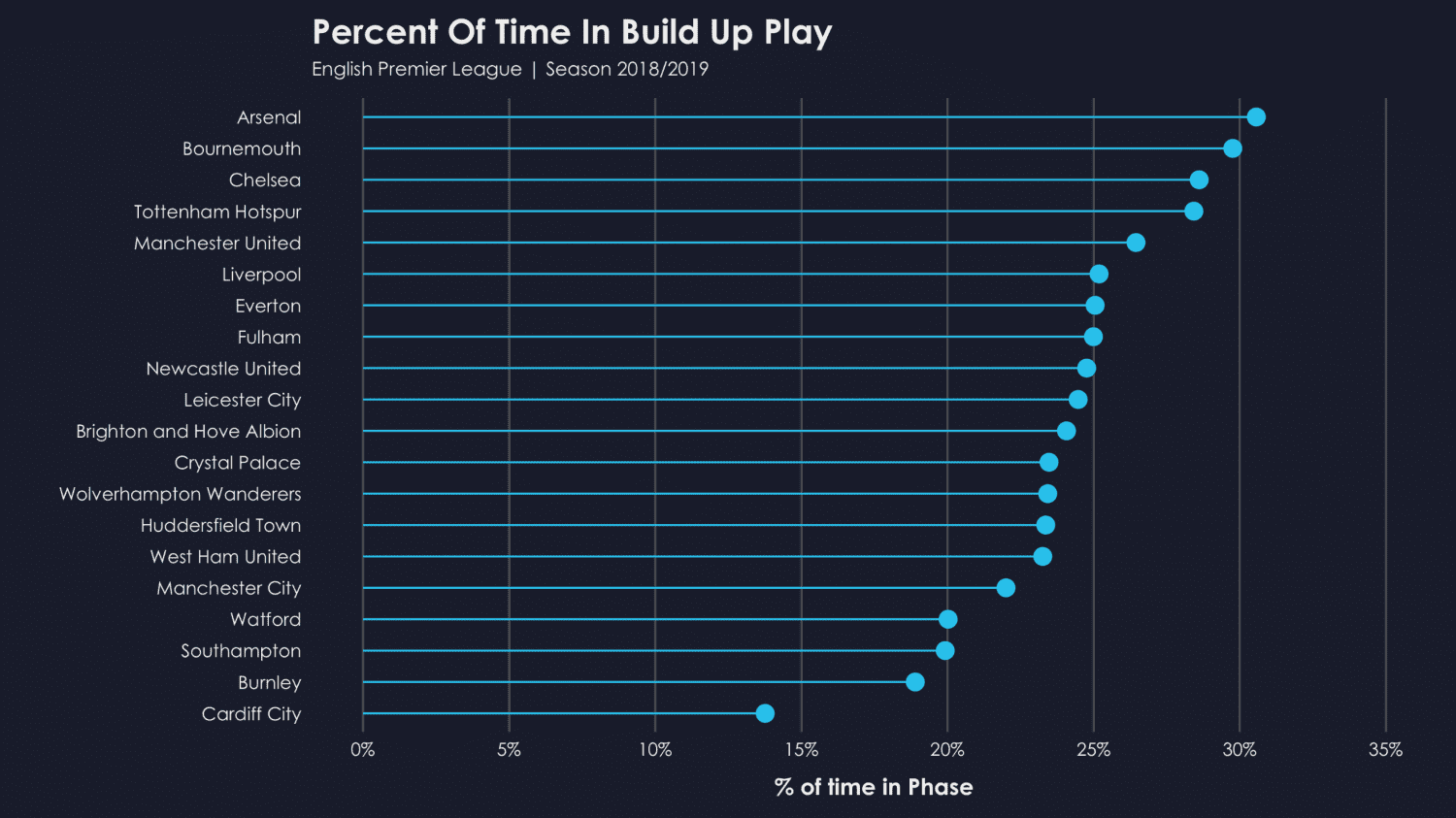 From the graphic above, we can see that Unai Emery’s Arsenal side spend the highest share of time in the build-up phase. Contrasting this with some of the more direct sides in the league in the form of Cardiff, Watford and Burnley, we can see straight away the different playing philosophies being adopted.

Interestingly, Manchester City spend a low share of their overall time in the build-up phase. By looking at established possession next, we get a good understanding as to why this is.

Having possession under control in the middle third characterised by players having time to take a couple of touches (time on the ball) or play a high number of quick passes between players.

– The most common phase type that teams play in.

– Comprises events that belong to at least a 2+ touch event sequence.

– Happens either after successfully building up or once a team has got out of transition.

– Can also take place after a set piece has been taken.

The established possession phase is where teams have control of the ball in midfield, and is the phase assigned to a large proportion of situations that take place on the field. Interestingly, the top six of this list is comprised of the top six in the Premier League table. After that, Leicester and Wolves show that their styles of play look very similar to these teams – where they look to possess the ball in the middle of the field and look to form attacks from there.

Teams looking to hit the ball long and gain territory.

– All long balls with a directness (proportion of distance upfield) of 75%+ included.

– Must also meet criteria of an established possession phase event.

– Usually an attempt by the team in possession to gain territory quickly.

Direct long play is exactly that, attempts by a team to hit the ball long either to the feet or head of a target man, or into space behind an opponent’s defensive line. The leaderboard below shows the players who are most involved in these phases – either as a receiver of the ball in this phase or the maker of those sort of passes. 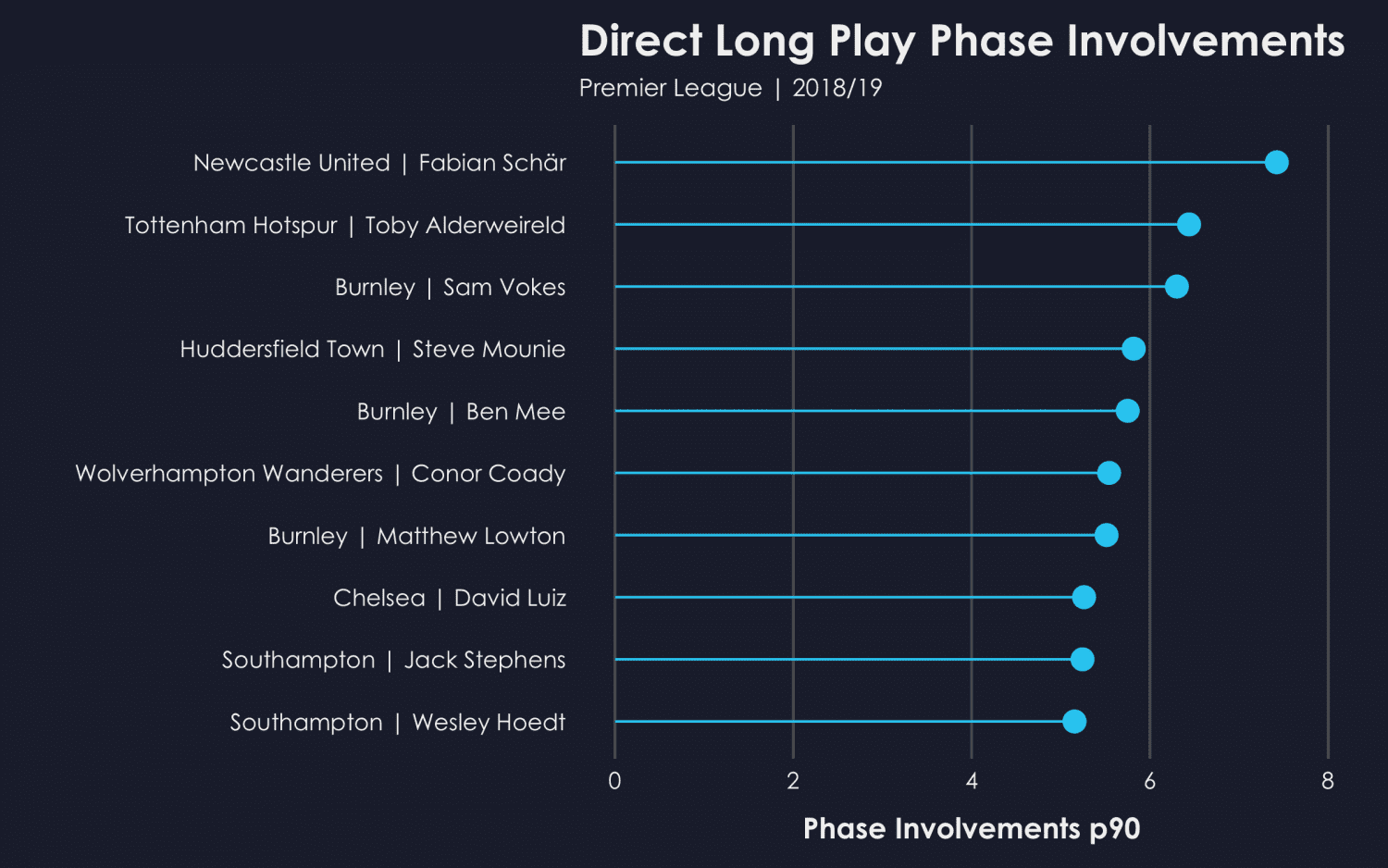 Steve Mounie and Sam Vokes show up here as two of the main attacking players for being on the end of Direct Long balls per 90. Additionally, the long passing tendencies of players such as Conor Coady, David Luiz and Fabian Schär are also shown. Coady and Luiz show a tendency to play long into wide areas for advancing full-backs or wingers, whilst Schär tends to play into more central areas, looking for a target man to bring others into play.

Having controlled possession in the attacking third.

– In this phase, teams are trying to attack the box and create chances.

– Teams can reach the attacking phase through various paths.

– A team can move in and out of the attacking phase.

The attacking phase takes into account all events that meet the criteria of the established possession phase but are just within the opponent’s third. A switchpoint model was used to identify the cut-off of where teams on the field look to change their approach, from passing the ball around comfortably in established possession to trying to attack the box and create a chance in the attacking phase.

The graphic below lists the leading players who take their teams into the attacking phase. Having both featured in transition involvements earlier, we can now see the importance of Fernandinho and Jorginho to their respective sides further up the pitch. Both of these players move the ball to the attacking players for their teams. Additionally, the importance of Paul Pogba is highlighted here, as is that of another underrated contributor in Granit Xhaka.

As outlined at the start of this article, OptaPro’s phase of play model is still being refined and the rules are subject to change in the near future.

Hopefully this blog provides a good glimpse of what outputs can be generated on both a team and player level, and how they will impact how a team looks to conduct opposition, post-match and recruitment analysis in the future.

If you would like to know more about the model or have any questions relating to what we have developed so far, please do get in touch with us at pro@optasports.com