Football is such a diverse sport with numerous tactics, unique scenarios and systems of playing. In order to capture the different ways a team plays, Stats Perform have developed a framework that captures the playing style of a team throughout a match.

The framework has moved away from the traditional accumulations of single events to provide an impression of the way a team plays. Stats Perform Playing Styles is a multivariate approach, therefore taking into consideration numerous events and factors that determine a team’s style of playing.

This provides a vast amount of insights compared with an accumulation of events, from the amount an individual player contributes to a particular style of play to the playing styles teams use to create shooting opportunities.

The following are the eight Playing Styles:

Each of the eight Playing Styles are calculated independently and, as a result, several styles can occur simultaneously within the same team possession. The strength of a Playing Style is represented by a membership value between 0% and 100% that is assigned to every team possession, based on the individual definitions and calculations. An exception to this is crossing, which can only be assigned a value of either 0% or 100% due to the crossing definition.

In this piece, we are going to provide you with a full breakdown of each style.

This is the first of three styles that are calculated in a very similar way. Maintenance captures possessions in which a team looks to maintain and secure possession of the ball within the defensive area of the pitch (see image below). 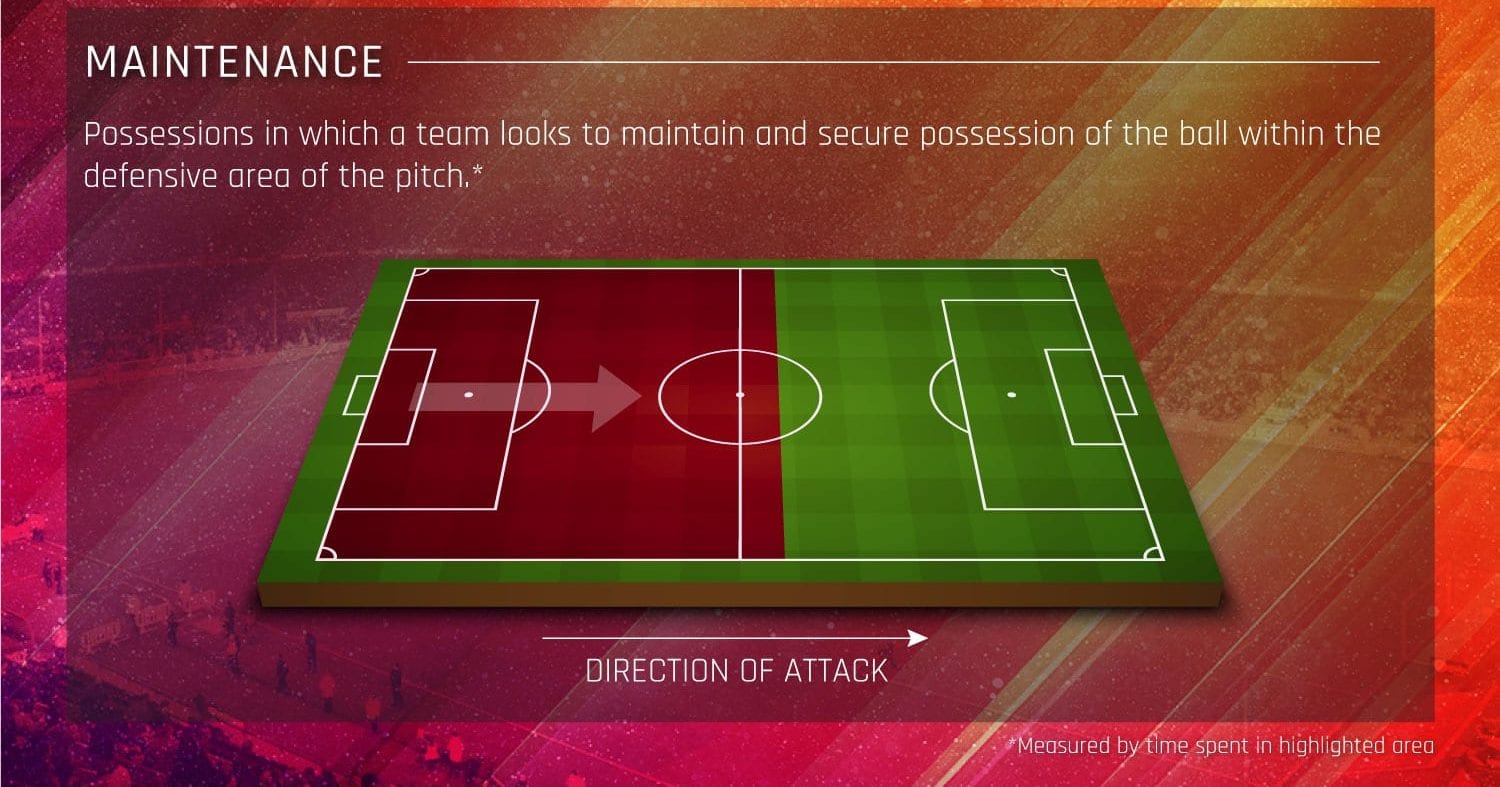 The time spent in possession directly relates to the Maintenance membership value. As a result, the more time a team has possession in the defensive area the higher the maintenance value.

Build Up also captures long and controlled ball possessions – but is aimed at periods of play where a team is looking for opportunities to attack. The calculation is similar to Maintenance, with the differences being the zone on the pitch and the time thresholds. The Build Up area is between the halfway line and the opposition’s penalty area (see image below) and works on the same principle that the longer the team has the ball in the highlighted area, the higher the Build Up value.

The Sustained Threat playing style is, again, similar to Maintenance and Build Up. However, here the focus lies on possessions in the attacking third of the pitch. The time spent in possession must be more than six seconds to be a Sustained Threat possession, which linearly increases to 100% membership.

The objective of the Fast Tempo Playing Style is to capture when the team is moving the ball quickly to increase the tempo and speed of the game. Fast Tempo looks at sequences of consecutive individual ‘fast possessions’. An individual fast possession must occur in the opposition’s half and can be achieved when the player releases the ball to a teammate in less than two seconds or when the player dribbles at a high tempo.

Direct play captures instances of play in which teams attempt to move the ball quickly towards the opposition’s goal through the use of long passes rather than sustained possession. Specifically, it looks at the forward distance gained every time a team makes use of any of the following events:

The forward distance gained must be greater than 20 metres to qualify for direct play and reaches 100 percent at 40 metres.

In the video example below, Fernandinho plays a forward pass we would consider to be a direct play because the length of the pass is 52.5 metres.

A counter attack occurs once a team regains possession and moves the ball into an attacking area via passes, dribbles or a combination of both.

In order to qualify as a counter attack, the ball must reach a target location within the opposition’s half. This location varies depending on the regain location.

Here is an example of a team regaining the ball and transitioning at speed into an opposition area of the pitch. When the ball is regained, we assign a regain line on the X-axis. We then set a target zone based on where the regain took place, which is displayed on the video after 15 seconds.

As a playing style, crossing occurs if the ball is delivered from a wide area of the pitch with the intention of finding a teammate. All crossing events in a possession are assigned a value of 100 percent. It’s the only playing style in which the membership value assigned to the team possession is binary, depending solely on the occurrence of a crossing event.

High press captures how high up the pitch a team regains possession.

The first consideration is the location where the team wins the ball. High press regains are those higher than 5 metres before the halfway line. The value increases linearly up until 15 metres into the opposition’s half, where it reaches 100 percent from there to the end line.

The second factor is the opposition’s time in possession prior to the high press regain happening. To retain the full value established based on the regain location, the opposition must have been in possession for at least 10 seconds. The time factor is introduced to attempt to capture controlled pressing efforts rather than ‘counter press’ regains.

The combination of these two factors leads to the final high press membership value. Regain events include:

The high press is the nearest to a defensive style of play. Here, Manchester City are trying to regain the ball as high up the pitch as possible, and the lines signify the membership value of the regain.

Teams are compared to the league average, which therefore allows a direct comparison between each club. Interestingly, in the Premier League, Hull City are 4% higher for Maintenance than the league average, ranking them in the league’s top 10. However, when it comes to Build Up and Sustained Threat, Hull’s position is reversed as they drop down to into the bottom three in both styles, indicating that Hull are failing to transition possession from the defensive area into the opposition’s half. On the other hand, Arsenal, who are renowned for their possession-based style, dominate possession in the Build Up and Sustained Threat areas. For Fast Tempo Arsenal are 82% above the Premier League average. Highlighting that when Arsenal have possession in the opposition’s half, the team aims to move the ball quickly. Playing Styles can, therefore, be an incredibly useful tool, objectively detailing how a team tends to play in various situations, as well as establishing how a team’s style of play changes over time, allowing users to assess what a manager has done in an attempt to improve his side.